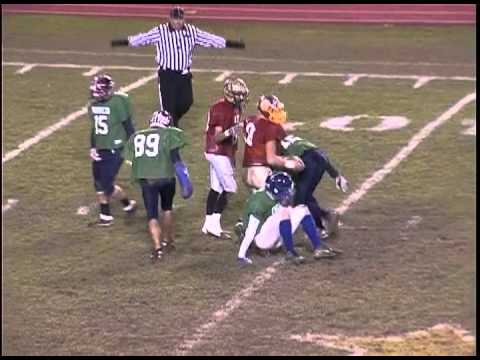 The Dallas receiver fell a yard short trying, but did more than enough to be named the MVP of the 61st annual UNICO All-Star Classic.

Brace caught three passes for 84 yards and a touchdown as the West defeated the East for a sixth consecutive time, 27-14 at Wyoming Area’s Anthony “Jake” Sobeski Stadium.

Brace caught a pass from Berwick’s Jared Pierce and tried to end a certain touchdown reception by doing a midair somersault into the end zone. He landed at the 1-yard line, and the West scored on the next play.

“I celebrated too early. I always wanted to do that. I didn’t get a chance to do that with Teddy,” said Brace, referring to Dallas coach Ted Jackson. “I wanted to do Reggie Bush one time.”

Brace did get into the end zone in the fourth quarter as he and Eugene Lewis ended up running right to the middle of the end zone on a pass from Tunkhannock’s Luke Seaberg. The two outjumped defenders and Brace came down with the ball for a 37-yard score.

“I talk to coach (Dick) Anderson still weekly. He said just be patient and we’re going to see what’s going to happen when the season is over.”

The season ended for just about everyone else on the field Wednesday night. Four players had their careers come to an abrupt halt after being ejected.

Otherwise, the game went as expected, with the West controlling it for the mostpart.

Dallas’ Jim Roccograndi opened the scoring with a 7-yard run in the first quarter to give the West a 7-0 lead. Pierce’s 1-yard run after Brace’s short landing on his somersault gave the West a 14-0 lead the halftime.

Coughlin’s Joe Parsnik returned the second-half kickoff 76 yards for an East score, cutting the deficit to 14-7.

The East finished off the scoring with its first offensive touchdown since the 2009 game. Hazleton Area’s Chad Hoffman hooked up with Holy Redeemer’s David Gawlas for a 17-yard touchdown with 4:20 left in the game.

“It was a great, great experience,” said West coach Mike Barrett of the West. “Number one was the talent. But they were very respectful kids. It was a pleasure. Anything we asked of them they did. And the fact the proceeds are going to help the flood victims is a great thing.”