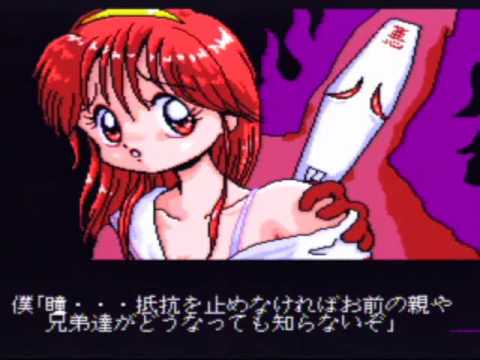 The things we go through to make videos…

Have you ever thought that you would see an adult game made for a Nintendo system? If not, then this video will violate your sensibilities, because they do exist. Nintendo had its silly adult Panesian titles and the SNES has its more advanced “SM Teacher” games and a few others that are unlicensed. “SM Teacher Hitomi” or “SM Choukyoushi Hitomi” is a small series of adult text adventures / simulation games that originated back in the early-mid nineties and were masterminded by Seibu Kikaku (Seibu Planning, and NOT TO BE CONFUSED with Seibu Kaihatsu) and EJ Corp. Unlike the Panesian titles for the NES, the SMTH games aren’t as “well made” in a sense. They feature more bugs and less insight… I can’t even believe what I’m saying. The NES and SNES adult games are pretty lousy as a whole. For some reason, the games are known (unofficially) as SM Teacher Hitomi, but “Choukyoushi” comes out as “Animal Trainer” or “Trainer”… “Trainer” and “Teacher” are somewhat similar, but… yah. This video is censored btw. Somebody has to do it, ya know?

Anyway, I’ve yet to verify the existence of all the SMTH games. I’ve seen four different titles total for sale over the years, SMTRemix, SMTH2, SMTH2Remix, and SMTH3. You can find several odd variations of these games on rom sites that I speculate may exist in cart form as well. Of all the ones I’ve seen, I own SMTH2Remix, and it seems to be the rarest of the four. Back when it was made, approximately 5,000 copies of the game was produced (and each copy was numbered). I can’t speak for the others since I don’t own them.

This game obviously isn’t good, but it certainly is a curiosity. In the game, a young girl (roughly 16 years of age) is taken away from her father by a group of gangsters and forced to go to a school in a faraway land that teaches victimized girls how to, well, do certain things. Between getting an education, they are taken to a dungeon to learn “stuff”. You have one month to build certain stats based on various tasks you can execute, with the twentieth day of the month playing a crucial role in what one ending you can receive out of a possible twenty. The audio and visuals are both (mostly) kinda crude, the kind of stuff you’d expect to see from MS Paint and the kind of stuff I remember composing on my old Tandy computer as a kid. It’s that simple really.

Here’s what this video is about:
A) Main Cast of Characters. There are only two, the player, who is aspiring to be an idol, and some freaky stalker guy who apparently likes BJs (dear god). The person describing the characters looks like a drag queen and that poster is certainly meant to resemble a sailor scout (likely Venus).
B) PART OF THE INTRODUCTION (Because I didn’t feel like editing the rest :P)
C) A Portion of the game, which is edited of course
D) A sample selection of artwork stills (with sample music from my studio program, as there was too much silence)
E) One of several endings in the game. It’s a surprise ending where she actually grows fond of the creepy organization henchman and marries him.