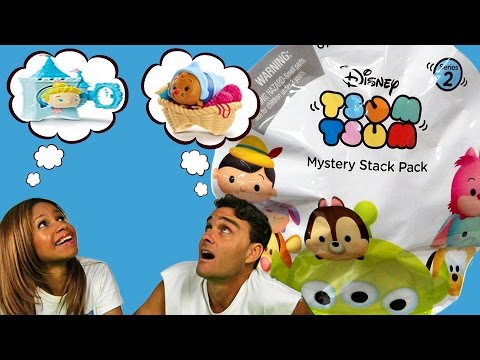 We tried to see who would Pop the Panda first and who could open the most Disney Tsum Tsum Mystery Stack Pack Blind Bags!
For more awesome toys and toy unboxing SUBSCRIBE ►
Click here for some of my best toy reviews and toy unboxing videos! ►
I also do sketch comedy, click here if you want to LOL ►

Pop the Panda Game
Pop the Panda provides hours of fun constructive enjoyment and is completely kid powered! For added convenience, all pieces can be stored inside the panda. For ages 4 and up. 2-6 players.

Everyone loves a mystery, so we combined the elements of mystery with Disney Tsum Tsum Mystery Stack Pack Blind Bags and the Pop the Panda game to bring you the ultimate surprise toy unboxing extravaganza. In case you’re new to the world of blind bag opening, blind bags are a small bag containing 1 mini toy per bag. They’re similar to the Minecraft blind boxes, It’s essentially a mystery bag because the bag does not indicate what toy you will receive – thus the surprise. Check out Konas2002 for many hilarious blind bag toys’ challenges like, “Bobbing For Apples & Lego Monster Blind Bags!,” and, “My Little Pony Blind Bag Cake Smash!” Subscribe to see blind bags and boxes, like Shopkins blind bags and Lego blind bags, unboxed.

Gas Out and The Ugglys Blind Bags:

Paw Patrol and Puppy in my Pocket Blind Bags:

About Konas2002
Let Mark and friends transport you into a word of play on Konas2002, a sketch comedy toy unboxing channel! On Konas2002 toy unboxing isn’t just a toy review, but instead a toy how to assemble and how to play. Mark’s endless imagination makes Konas2002 an unboxing channel anyone can relate too. Check out some of the best toy unboxing videos from your favorite toy brands like Hasbro, Mattel, Lego, and Fisher Price. Play along with Mark and his collection of Play Doh play sets like the Play Doh Burger Builder as well as build along with numerous Lego videos. Let Mark teach you some strategic board game tips with some of the best board games like Pop the Pig and Hungry Hungry Hippos. Or truly immerse yourself in make believe with Barbie, Hello Kitty, Dora the Explorer, and your favorite Disney toys (Frozen Toys!!!) on Konas2002!