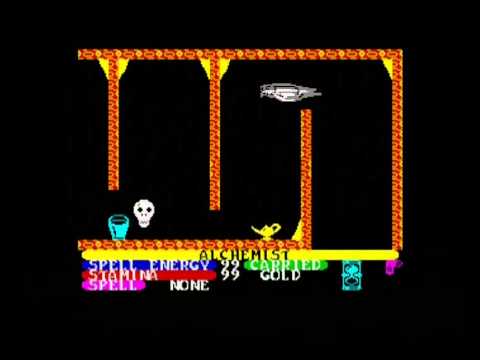 Zeus presents Alchemist (un-emulated) for the zx spectrum, a true classic from the golden era of spectrum gaming which must not be forgotten alongside the software house and all programmers that were involved in making this game.

As a kid i always found this game fascinating, strange colourful screens, wizards, ghouls, skulls and demons etc but had no idea how to play it,…until now after looking up the solution.
It is in fact a very nice game.
You must find four specific items, return them to the treasure chest where they will morph into the four bits of magical scroll needed to defeat the warlock.
I like the touch that you can morph between wizard and bird, it’s a nice touch.
The only disappointing part for me is that after defeating the demon, he doesn’t dissolve or show he has been defeated, just a press of a button and straight to a congratulations message :-/ Oh well, better than it just looping over back to the start again i guess.
I used the infinte stamina & spell pokes (cheats) so i could upload the entire game for your viewing pleasure.

Hope all you Spectrum fans enjoy this upload.

Please note: NONE of my game uploads are emulated in any way whatsoever, they are 100% original recordings by myself taken directly from the original hardware the game was intended for, that way you know you’re watching the real thing.
I will also always state weather i am using any cheats in the game, if not mentioned then i am not using any.
Check out my channel ( dedicated to gamers who loved the games of yesteryear.

Switch to 480p for best video quality and feel free to leave comments on my channel and vid’s.

Keeping the memory of the Spectrum and it’s cool games alive!!!